The Future Of VR In The World Of E-Commerce

The Future Of VR In The World Of E-Commerce

In the last few years, Virtual Reality (VR), Augmented Reality (AR) and Mixed Reality (MR) have become some of the biggest tech trends influencing different sectors. These tech innovations give users a type of immersive experience which many stakeholders in different sectors such as education, construction, and e-commerce, etc find to be promising. Tech innovators believe that AR, VR, and MR will transform how we do things, and while we can already see the impact of AR in e-commerce, VR seems to be taking its time. For one, e-commerce players use AR to provide try-on features that allow potential buyers to see how a product fits before making a purchase. For example, IKEA lets buyers see how a furniture piece fit into their space before making a choice on which none to buy. On the other hand, VR is exactly useful in the e-commerce world at the moment. This is why we have decided to talk about it in this article.

Unlike AR which gives users a computer-generated visual experience of the real world, VR creates an immersive experience that is entirely different from the real world through computer simulation. Perhaps this is one of the reasons why VR has been limited in use and why it is not gaining traction in e-commerce like AR.
Another issue about VR is its dependence on VR-compatible hardware, which makes it impossible to use without the assigned hardware. Additionally, VR hardware is limited in function, the battery power of most of them lasts for about two hours therefore making it a tech product for most hobbyists. This limitation also discourages developers from creating VR software and apps because the VR market is not yet big.
If there’s a way VR can fully function on mobile devices; smartphones and tabs like AR, maybe it will e-commerce players will see it as a useful tool that can improve their business. For now, VR is mostly limited to movies and games.

A Change is Coming For VR in E-commerce 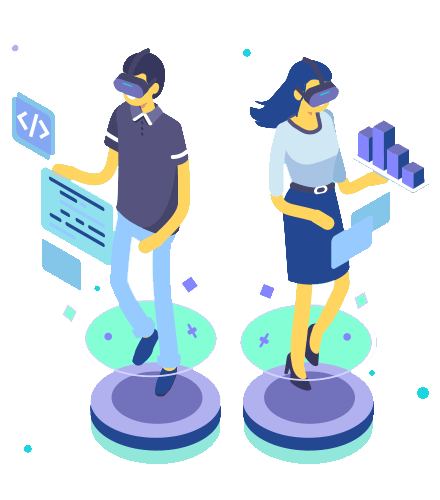 Facebook is the biggest social network in the world at the moment and it has a huge influence on e-commerce. The good news is that Facebook is making moves to become a key player in the VR space. It started in 2014 when the company acquired Oculus, which is a VR platform. Although, VR didn’t gain traction as Mark Zuckerberg envisioned. However, with Facebook’s active influence, who knows what might happen in the next few years? Facebook’s Oculus headset is currently the number one VR headset in the market, if Facebook can improve the hardware’s functionality including the battery power, there’s a chance that the device will become more popular among users. And that will also improve e-commerce in the long run; imagine being able to virtually test drive a car and getting all the full experience as if you were inside an actual car. This a VR feature that Facebook can make popular if the company can improve VR hardware.
Apple also promised to launch its VR headset this year with superior features to the ones we have in the market at the moment. Apple promised that the product, which is known as T288, will come with an 8K resolution, smart glass, wireless, and external cameras like the Microsoft Hololens. However, there are about three weeks left in the year, let’s just say 2020 is not the year for Apple’s VR device.
The best way VR can become mainstream like VR is it becomes easy for regular people to use VR apps and without unwanted stress. With that, companies will be able to create digital ad campaigns strictly for VR, which anyone who has VR hardware can see. Virtual stores and showrooms can even become a thing, a “Ready Player One” type of experience. If VR hardware becomes more accessible and usable, more developers will be interested in creating VR apps. All of which can make VR become a thriving world of its own as we have with smartphones.
Another way for VR to become mainstream is if it becomes less techie. To understand this better, let’s look at AR. Besides the API integration e-commerce stores have to do before they can offer AR features, there’s no special skill required to continue to operate AR. All you have to do is take 3D pictures and videos of your products and upload them, any AR-enabled device will access the pictures and videos. However, creating virtual showrooms or stores for different products requires expertise and that makes it costly. Online store owners will have to hire experts to create a virtual reality experience for all their products, and at this point, that doesn’t seem like a feasible plan.
Interestingly, this has been done before. In 2016, eBay launched a virtual reality store where the company displayed thousands of items on sale. All the products were converted into 3D visuals for buyers to browse. Even though this move was futuristic, it was short-lived and everyone has moved on since then.

If there’s a way for VR to become more accessible, affordable, and less technical, there’s no stopping it from transforming e-commerce completely. For starters, e-commerce will have a new space; VR e-commerce. Remember e-commerce started on the desktop, now we have thriving mobile e-commerce which has a strong influence on e-commerce generally. This is the predicted future for VR. If VR gains traction in e-commerce, here are some of the futuristic benefits of VR for e-commerce.
No Physical Office: A lot of e-commerce business owners don’t have a physical office, they run their business entirely online and buyers access them via desktop or mobile. This will also be replicated if VR commerce becomes a thing. Many e-commerce players and budding e-commerce business owners will set up their stores in the VR space, thereby saving cost on office space and bypassing physical office commitments.
Better User Experience: statistics shows that most shoppers prefer in-store shipping because they get a personal shopping experience, they see how a product actually looks and feels like. This experience can be replicated in VR commerce as shoppers will not simply see how a product will look, but will actually know how a product will feel when they use it. So, in that way, VR will create the closest experience to how it feels like shopping in physical stores, if not better.